Thanks for the adventure, Mike Lee

Tom Harper, CEO of Networld Media Group and ATMIA's founding director, shares memories of Mike Lee, who is retiring as CEO of ATMIA in June. 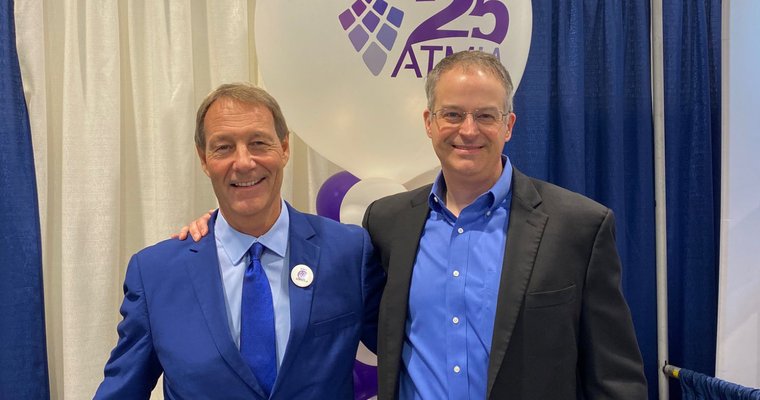 Whenever I've introduced Mike Lee from the podium at ATMIA conferences, I've often said (with more than an ounce of pride) that I hired him in a London pub in 2000.

He didn't actually say yes right away, but it went something like this. "Hey Mike, this association is just getting started, and we don't really have a budget to hire you. You'll have to generate your own salary. We need a European executive director. What do you say?"

Who in their right professional mind would say yes to that?

Only someone confident enough to make his own way. Only a visionary with the ability to see potential as if it had already happened.

After some months, he finally agreed. Mike would not only forge ahead and generate way more than his own salary, he'd be promoted to CEO of the entire association in 2004.

Mike's international notoriety has become legendary. He is the ATM industry's global diplomat, comfortable in every culture he's found himself in. His ability to build relationships while making meaningful progress in new markets built ATMIA into a cross-border phenomenon that has unified and transformed the entire industry.

South of the border, and beyond

In 2005, I joined Mike at one of the first ATMIA Africa conferences. He invited me to stay at his guest house in Cape Town, South Africa, and eat at his family dinner table every night after the day's sessions were done. He and his wife Sannettha even stocked my guest kitchen with American food brands to make me feel at home. That was Mike!

We've crossed many borders together. Some of our most memorable industry events were in Budapest, where he taught us all to speak some Hungarian; Madrid, where we snuck away to an art museum; and Beijing, where we walked the Great Wall, visited the Forbidden Palace and dined at a North Korean restaurant (the most unique meal we've ever had.)

Mike's network of industry contacts numbers in the thousands. He's been welcomed warmly by industry leaders from the Americas, Africa, Europe, the Middle East, Australia and Asia. He traveled extensively throughout the globe to promote and protect our industry. His influence extends to government agencies, politicians, law enforcement, regulators, lawmakers and other dignitaries.

Rarely has one person impacted an entire industry like Mike has. But it's not just the market he's inspired; it's the people. Through his kindness, creativity, diplomacy and faith, Mike will be personally missed by many.

I include myself in this crowd of colleagues. To him, we were a collection of individuals he got to know one at a time. If you asked Mike to name the most important part of his job, he'd point to the friends he'd made over the years, and the multicultural family that gathered around him.

A legacy and a future

When it comes to his industry accomplishments, the list is long. Mike started many initiatives, such as the Global ATM Security Alliance, Industry Mutual Defense Fund, Industry Research Fund, ATMIA Academy, ATM Security Association, and most recently, the Next Gen initiative.

In addition to this impressive portfolio of achievements, he trailblazed the European, Australasian, African and Middle East chapters, and has launched too many committees and regional boards to count.

Every board meeting I've attended with him over the past 22 years highlighted his business skill and visionary qualities. His character, too. A few times, when I and other board members wanted to jab back at a competing association or conference, Mike's calm, reassuring words kept us on the high road. He saw into the future with wisdom, and the right path would always make itself known to him.

In Mike's own words

I asked our friend a few questions that I knew would be on the minds of many of us in the industry.

A."Personally, the hardest thing in business is when partners you trusted, and worked with, suddenly turn into your biggest competitors; this kind of scenario can test your mettle and your powers of forgiveness to the full!

"As CEO, the two biggest challenges we faced in my time were the financial or credit crisis and the subsequent Great Recession from 2007 to about 2010, and then the devastating first year of the coronavirus pandemic in 2020. The first economic crisis taught us at ATMIA to put aside cash reserves which then helped to save us ten years later in the pandemic.

"Our biggest success in my time was completing the complex future-proofing project of developing a global consensus around the Next Gen ATM template for a new API app model for ATMs. The second success that will have long-term beneficial impacts on ATMIA and the industry as a whole is our acquisition of the ATM Security Association (ASA) and its subsequent developments like the Risk Register, best practices, and the industry's first-ever global intelligence system for crime and fraud data, called the Crisis and Crime Management Intelligence System (CCMIS).

"To be in a position where there is a whole new future-proofed architecture possible for the ATM ecosystem, based on consensus between global vendors and deployers, and, at the same time, a powerful set of intelligence tools and security best practices to protect the industry from the work of criminals and fraudsters, is tremendously satisfying."

Q. What finally made you say yes to my job offer in that pub?

A."We had already established trust and I knew you were a man of your word with an overflowing enthusiasm for your vision to build ATMIA Europe as the next step for the association. It seemed like an exciting challenge in a growing and important industry so I decided to accept your offer, kind of like agreeing to go on an adventure!"

Q. What are the top three trends you see for the industry's future?

Q. And the top three challenges?

Q. What do you plan to do during retirement?

A."Write, paint, sketch, stay fit and happy, and have dates with my wife."

A."It's been a fantastic journey and I have no regrets about accepting your offer in the pub in London at the turn of this century! And may our 2050 vision come true for the industry!"

It's been quite a journey, indeed. Mike, if I may speak on behalf of the entire global ATM industry, we toast your exemplary leadership over the past two decades. You have been a bright light for us, not only during the dark times we've faced, but more importantly, the many times you led us to new heights and exciting opportunities.

May you enjoy your time ahead, especially the dates with Sannettha!

It has been my honor to serve this industry alongside you. I know your many colleagues would say the same.

Tom Harper is publisher of BiblicalLeadership.com and CEO of Networld Media Group. He has written four books, including Servant Leader Strong: Uniting Biblical Wisdom and High-Performance Leadership (DeepWater Books, 2019), Through Colored Glasses: How Great Leaders Reveal Reality (DeepWater, 2018), Leading from the Lions' Den: Leadership Principles from Every Book of the Bible (B&H, 2010), and Career Crossover: Leaving the Marketplace for Ministry.